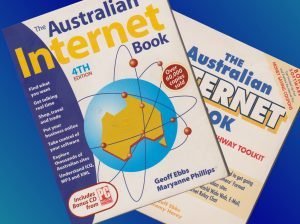 First published in March 1995, The Australian Internet Book introduced over 250,000 Australians to the Internet. The book sold 65,000 copies across four editions making it the best selling technical book ever published in Australia and was packaged with modems and Internet accounts while people learned how to take advantage of this brilliant new tool.

The book introduced an original pedagogy that used one double page spread per idea, with two images, the starting point and the end point and adopted the emerging format of all technical books: a series of regular graphical and textual formatting devices to assist the reader in navigating through the complex text an separate technical information from explanatory information.

The directory published in the first edition included all 66 websites available in Australia and had become an online tool by the second edition, one of the four most popular websites in Australia at the end of 1995. At the time Microsoft did not believe the Internet would interrupt its plans for the MSN and offered the author an attractive contract to write the Australian MSN book. It was declined. Other publishers wanting to dominate the market offered the author attractive contracts to work on their books instead. The Australian version of many early editions of Internet books were co-authored by Geoff Ebbs, or co-author Maryanne Philips. This game culminated with Living on the Web for Dummies at which point I briefly became publisher of IDG Books Australia until it was purchased globally by J Wiley and Sons.